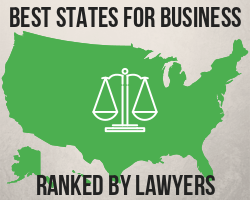 Savvy founders and entrepreneurs ask which states have fair legal systems and competent, impartial judges, because they know the state in which they incorporate matters.

For years, information about state legal systems was anecdotal. However, in 2002, a non-profit organization known as ILR or the Institute for Legal Reform, began asking corporate attorneys to assess the state systems in which they work, to publish a report known as The Lawsuit Climate Survey: Ranking the States. The results of thee 2019 Report are out. In this comprehensive survey, focusing on fairness and reasonableness of state legal systems, Delaware ranks #1.

In terms of overall state rankings, after Delaware at number one, Maine is in the number two spot; next is Connecticut, then Wyoming and Alaska round out the top 5.

And at the bottom of the list are some of the largest states in the nation—New York is ranked 36, Texas is ranked 38, Florida is ranked 46, and California comes in at 48, barely beating out Louisiana and Illinois who take the title of the worst ranking of all the states.

Delaware ranks first in eight of the 10 categories!

Here is how the survey is designed. Attorneys are asked to evaluate their opinions of each state’s liability procedure, using a numeric ranking of significant elements. Those surveyed were part of a “national sample of 1,307 in-house general counsel, senior litigators or attorneys, and other senior executives at companies with at least $100 million in annual revenues who indicated they: (1) are knowledgeable about litigation matters; and (2) have recent litigation experience in each state they evaluate,” (Executive Summary of Ranking the States, The Lawsuit Climate Survey, p.3).

Wondering where the supposedly-corporate-friendly Nevada ranks? Number 29. As well, it failed to crack the Top 15 in any category. Its highest category ranking was 17th (in Overall Treatment of Tort and Contract Litigation).

The poor performance of other states puts to rest the notion that they are comparable to the truly corporate-friendly Delaware.

THE AUTHOR OF THIS BLOG ARTICLE IS NOT A LAWYER AND HARVARD BUSINESS SERVICES, INC. IS NOT A LAW FIRM. THE ARTICLE ABOVE IS NOT INTENDED AS LEGAL ADVICE AND SHOULD NOT BE TAKEN AS LEGAL ADVICE. THIS SHORT ARTICLE IS STRICTLY TO MENTION SOME ASPECTS OF DELAWARE'S CORPORATION LAWS AND/OR LAWS RELATING TO OTHER FORMS OF ENTITIES WHICH YOU MAY NOT BE FAMILIAR WITH. WE RECOMMEND THAT YOU CONSULT WITH A LAWYER BEFORE FORMULATING A STRATEGY WHICH WILL BE SUITABLE FOR YOUR SPECIFIC CASE.