Communicating in a Business Crisis 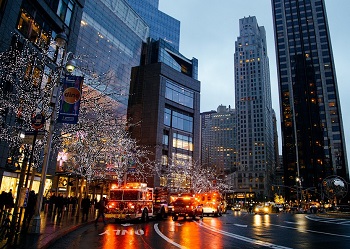 Does every business need a crisis communications plan? No, but a surprising number of businesses, even small businesses, do.

Crises vary in degree, intensity, and effect on the public. A company’s bankruptcy is a tragedy, one that deeply affects employees, customers, and stockholders. It might even have a ripple economic effect on a community or a region. The effects of such a crisis, while severe to those involved, are limited insofar as the affected population. A swarm of tornadoes that level a town is a contained crisis. While the entire country will feel deep sympathy for the townspeople, the threat and effects will be largely regional.

The 9/11 terrorist attacks and the subsequent anthrax mailings had far wider ripples. In the first, the American mainland suffered 3,000 killed in its first significant foreign attack since the War of 1812, and the threat of further terrorist strikes frightened millions. After the anthrax-tainted letters began showing up the previously benign mail slot in every American home suddenly became the potential portal for a deadly disease.

Do you need a crisis communications plan?

In my case, the worse case scenario I can conceive of for Experience Media Consulting, my media and presentation training business, is my clients suddenly abandoning me. Since the effect of that crisis would be extremely limited (a severe economic blow to me as an individual) I don’t need a crisis communications plan that goes beyond telling my wife and my accountant what has happened.

But for many entrepreneurs, a crisis communications plan is essential because they have far more stakeholders. Now, understand that you can’t have a crisis communications plan until you first have a crisis management plan. If your not managing the crisis, then you don’t have a whole lot to communicate. Certainly, “We’re ad-libbing our way through this problem,” is a less-than-positive response to media inquiries in a crisis.

Let’s look at the three most basic facts stakeholders want to know about any crisis, no matter how limited it is in scope:

In crises ranging from a tainted product reaching the marketplace and a horrific workplace shooting all the way down to the drying up of a small consultancy’s client base, stakeholders want these questions answered. Obviously, the tainted product or the gunman in the workplace require far greater outreach than the small business failing. In the former crises, there are so many stakeholders that the three questions must be answered via the mass media. In the latter, you could handle the chore with a few phone calls and/or e-mails. (If you’re telling your spouse your business went bust, I suggest doing that face-to-face, rather than by e-mail, unless you want your marriage to go bust along with the business.)

Communicating Crisis through a Spokesperson

If you have determined that you do need a crisis communication plan, here are some tips for you and your spokespersons:

Often, when a crisis breaks, you see multiple personalities jostling for the media spotlight, trying to manage the crisis communications. This is counterproductive; it sends a message that nobody is in charge. Also, it’s imperative that everyone in the organization knows who the proper spokespersons are and refers reporters to those spokespersons. If your people don’t know who to refer the media to, you’ll face a flood tide of speculative answers from your own employees, most of whom will have only a partial picture of the crisis. Also, the fewer the spokespersons and the higher their rank, the better the plan.

Tip #2: Keep your spokespersons in the loop.

Your crisis communications plan must include mechanisms for keeping spokespersons in the information flow. They cannot address public concerns if they don’t know what’s going on themselves. Never withhold information from your spokespersons because you want it withheld from the public. If that information gets out and the spokesperson did not know about it, he loses all credibility with the media.

Late messages are as bad as mixed messages. If your spokespersons don’t get out and address the crisis quickly, other “experts,” many of them self-appointed and ill-informed, will assume the mantle of authority. After the 9/11 attacks, Americans wondered if they should buy gas masks. It took the federal government three weeks to come up with the recommendation not to buy them. During these weeks, self-appointed terrorism experts filled the 24-hour news channels, warning of chemical weapons and frightening the public into depleting Army/Navy stores and online military surplus companies of every gas mask in stock. If you don’t respond in a timely manner, someone else will, and it may prove hard to wrest back control of crisis communications once that horse is out of the barn.

Your spokespersons needs to exhibit empathy, not paternalism. People resent being talked down to, even in extremely dire crises. Another form of paternalism is withholding bad news from the public for fear it will panic or react badly. Eventually the information is going to come out and once it does, your credibility will be in shambles.  The public can handle bad news if you present it in a mature, factual, respectful way. A series of 55 focus groups conducted across the country by the Centers for Disease Control and five universities found that uncertainty is more difficult to deal with than bad news and that any information is empowering in a crisis.

The media will invite you and your spokespersons to speculate on the progress and outcome of the crisis. Decline the invitation.  Speculation is dangerous. If you are wrong, you damage your credibility.

A rumor left standing becomes a fact in short order. While this is an extreme example and unlikely to be duplicated in the world of business, it is instructive: There were rumors of mass assaults in the Superdome in the aftermath of Hurricane Katrina. It didn’t happen, but authorities failed to refute the rumors in a timely manner and to this day many people still believe and repeat the stories.

“I don’t know. We’re working on it,” is a perfectly valid answer, especially if followed by a description of what steps are being taken. On the other hand, you can’t manage a crisis by withholding information. As Shakespeare wrote in The Merchant of Venice, “Truth will out.”  When it does, your credibility plummets and you find yourself managing both a crisis and a credibility gap.  But what about information you really can’t share? Respectfully, tell the media that you are withholding some information and why you are withholding it. If you have no results to report, talk about the process that will lead to results. The public wants to know something is being done, even if it hasn’t yet borne fruit.

Candor is the most important tool for the crisis communicator. It served Johnson & Johnson well in the 1982 Tylenol poisoning crisis. J&J’s handling of the crisis is cited in every crisis management text written in the last three decades. And from a business point of view, candor worked extremely well because within months of the emergency, Tylenol regained its position as the country’s top-selling over-the-counter pain relief medication.