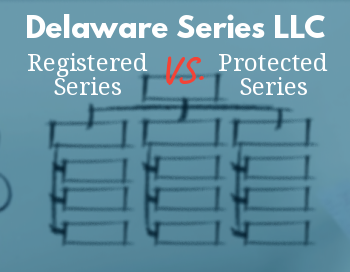 Delaware’s limited liability company statute states that LLCs may be comprised in a “series,” each multiple treated as a separate entity with distinct business, debts, members and management.

Effective August 1, 2019, the Delaware Legislature amended the statute’s series LLC provisions. The amendments create a new type of series—a Registered Series LLC— which can be formed through a filing made with the State. The original series LLC is now called the Protected Series.

Delaware law still requires little to create or document individual series, even in the case of a registered series.

Delaware requires that the Certificate of Formation of a series “LLC” contains specific “series” language, which states that the LLC may create a separate series intended to be operationally and legally separate. Further, the separateness of the series must be respected by actions such as maintaining separate records, accounts and tax id numbers.

Delaware’s LLC statute did not, and does not require any filings to create original series. The statute set out no naming rules or requirements for the original series, what is now known as the Protected Series. One concern is the business world has the extra task of integrating the Registered Series and the Original Protected Series into existing law and business practices.

The amendments create a class of Registered Series that require slightly greater documentation and formality for their creation. The requirements include:

In opening certain accounts or conducting significant business transactions, including those involving an extension of credit or a loan, a company (in this case, an individual series) is required to provide a Certificate of Formation and a Certificate of Good Standing.

Original Series (now called the Protected Series) cannot satisfy this request for each of the internal series in the Protected Series LLC. This can raise issues and cause delays in drawing up contracts. The ability of a series to provide a Certificate of Formation and a Good Standing Certificate for each registered series makes it easier to address those concerns.

Even though the amendments address a number of issues, many issues remain outstanding. It is unclear whether or not states other than Delaware (which do not have a series concept in their business entity law or jurisprudence) will respect the separateness of the asset shields of the Delaware series.

Further, many service providers, banks, attorneys, accountants, other businesses are still unfamiliar with the series concept, regardless of the new changes. It often takes time to explain the series concept and to obtain approval for documentation required, for example, from a bank’s lending group.

The Failures of the Amendments

The key justifications for using the series LLC were the ease of creation and documentation, and the absence of fees. It has been seen as an alternative to creating a large number of separate LLCs.

It was thought that investors would use the Series LLC to hold individual investments, real estate properties or other individual assets under one LLC umbrella, but with the protection of multiple entities.

Though many publications claim the use of the series LLC is growing, and that it is well-suited for certain types of investment, the use of series LLC is problematic, and the recent amendments will likely not change that fact.

The increased formality in creating a series and the greater scrutiny on documentation diminish the administrative ease of the Series LLC. The annual franchise tax fee, although smaller than that required for a separate LLC, increases the cost of the series concept. Forming several, distinct LLCs is a better option, given the unresolved issues in using the Series LLC.

Click here to watch our webinar on understanding the different types of LLCs.