Mastering Tough Questions From the Media 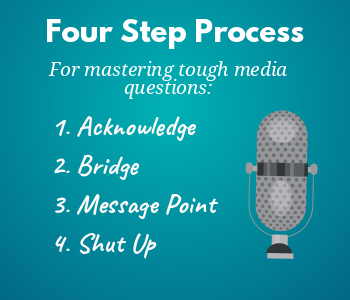 Back in the early 1980s, when I was producing the “CBS Morning News” (now renamed “The Early Show”) Diane Sawyer, the co-anchor, booked an interview with former President Richard M. Nixon.

This was a considerable time after Mr. Nixon had undergone the grilling by David Frost depicted in the play and movie, Frost/Nixon, and through his books, articles and speeches, the former president had recast himself as an elder statesman. Moreover, Ms. Sawyer had been an aide in Nixon’s White House and when he left Washington in disgrace, she was one of a tiny handful of staffers who accompanied him into his temporary exile in San Clemente, CA, where she helped him organize his papers.

So you can understand how the former president, now living on an estate in New Jersey, might expect a benign interview from Ms. Sawyer. What he got was an on-camera third degree that made the Frost interview look like a tea party in Mayfair.

My point is apolitical; it is simply that every reporter, even one you know well, is capable of doing a tough interview. Perhaps, because he anticipated gentle handling, Mr. Nixon was atypically ill-prepared for the onslaught.

I tell this story to all my media-training clients because I want them to prepare for tough questions, even when they assume the interview occasion is unlikely to prompt them. In fact, I have formulated a law of interviews, with a nod to U.S. Air Force Captain Edward A. Murphy’s quote (Murphy’s Law), “Anything that can go wrong will.”

My version is: “Anyone unprepared for tough questions will get them.”

Here's a case history: I was preparing a financial services company for a news conference announcing the California test rollout of a new credit card product. When I asked them what tough questions reporters might ask. The lead spokesperson said, “Oh, we won't get any tough questions. This product is so great.”

“O.K.,” I said. “Pretend Ralph Nader is coming to the news conference. What will he ask?”

“Well,” said the lead spokesperson, “he'd probably ask where he could sign up for our product.” That brought laughter from his fellow panelists.
Do I need to tell you what happened at the news conference? The first question was worthy of a criminal prosecutor in its tone, severity, and insight. The spokespersons just sat at their table with their mouths open. What happened next was the journalistic equivalent of a shark feeding frenzy; the reporters tore them to shreds.

Interestingly, a year later there was a national rollout at a New York news conference and this time the clients drilled extensively, developing persuasive answers to tough questions. They were ready for combat, but this time there was no reportorial onslaught. Perhaps lulled by the huge buffet breakfast the client laid out, the New York and national reporters didn't ask a single tough question.

But it's better to prepare for the tough questions and not get them than to be unprepared and and suffer a barrage of them. What’s the best way to do this? Write down your nightmare questions and then formulate answers. But don’t stop there; you want to use those tough questions to transition to your own message points.

The way you do this is my four-step process:

What do I mean?

But what if the reporter asks the question again? Well, he’s just opened the door for you to bridge to a second of your agenda points.

Of course none of this works unless you HAVE an agenda. I always recommend coming up with a five point agenda for every interview. Then, come up with tough questions and cut-and-paste agenda points under each tough question. What you now have is a visual road map you’ll drive down if you get any of your nightmare questions.

What should that answer contain? I recommend the interview equivalent of General Colin Powell’s “Shock and Awe” tactics: overwhelm the negative in a question with multiple positives.

How many positives? According to Vincent Covello, a social scientist and risk consultant with whom I have worked, you need three positives to overwhelm a negative.

To illustrate how this works, let me cite a real world example. I do a lot of media training for NASA and inevitably in those workshops a participant comes up with some variation of this nightmare question:

“Why waste or spend money on space exploration when there are such pressing needs here on earth?”

Over the years workshop participants have supplied me with an embarrassment of riches for the answer. Taking multiple effective responses and merging them, I came up with three cogent shock and awe points, and a subset of three specifics to illustrate the final point.

Here are the elements of that response:

The subset are specifics that illustrate the third point:

This three-part answer, with its three-part subset is a powerful shock and awe response to the negative “waste” or “spend” money on space. For media purposes we can’t get all of this to fit our ideal soundbite length of 30 words, spoken in ten seconds and comprised of three sentences. But with some condensation, here is a soundbite version:

“NASA’s Congressionally-approved budget, less than one percent of federal expenditures, is an investment in high-tech jobs, scientific knowledge and spin-offs that make life easier and safer.”

Following up on the soundbite, the respondent can then cite any or all of the specifics.

Whether you’re dealing with outer space or outerwear, when you prepare for an interview, it’s critical to anticipate tough questions and to be ready to respond with shock-and-awe answers.

I recently read an article in the New York Times that contained a textbook case of how not to respond to a negative question.

The story was about a large employer, which I’ll call “The Enterprise.” The Enterprise is encountering some rough weather including worsening conditions that has led it to some downsizing. The Enterprise’s chief executive was quoted this way in the newspaper: “We’re not adrift. And the vision is not gone. And we have a plan. We have a very sound plan.”

I always encourage clients, when formulating an answer to a media question, to include the sense of the question in the answer, so that the response can stand alone as a soundbite or direct quote. The sole exception to this rule is if the question is hostile or contains negative words. While I was not there when the chief executive’s interview took place, I am confident that the quote I cited came in response to some variation of this question: “Is The Enterprise adrift under your watch? Does it (or, do you) lack vision?”

The executive snapped up the bait. Omitting the question and just running with the answer, the reader is left with the impression that the whole matter of visionless, drifting leadership came from the executive.

By omitting the question and just using the answer that contains the negatives, it appears the interview subject brought the negative up for consideration.

So how do you answer “Isn’t this a disaster waiting to happen?” and its kindred questions? Above, I noted my four-steps to get from a tough question to your agenda point: acknowledge the question with a short form answer, build a verbal bridge, deploy an agenda point and, finally, shut up (don’t revisit the hostile question or the negative words).

The executive, faced with, “Is The Enterprise adrift under your watch?” could have answered, “No.” As far as short form answers go, “no” is unparalleled -- it’s the second shortest word in the English language (the shortest being “I.”) If the reporter wants to use the negative word “adrift,” it has to come from him, it didn’t come from the executive.