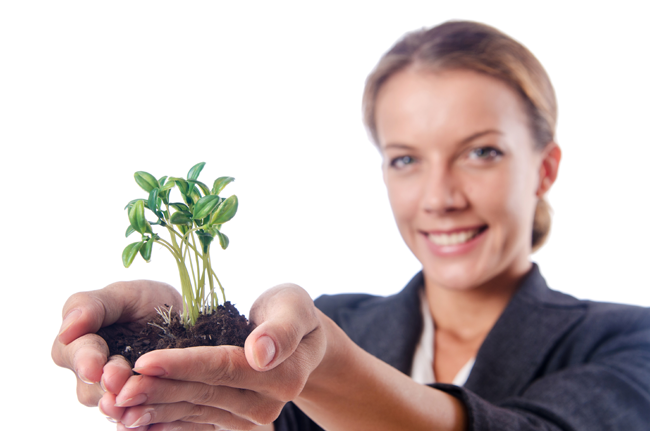 Two steps forward, one step back: this adage can describe most social, political, economic, educational and business advances by women.

In 2015, women once again have taken steps forward—this time in the business world, as evidenced by the increase in the number of female-owned businesses in America. However, along with the good news comes disappointing news: women do not own nearly as many companies as men do in this country.

According to the Center for Venture Research, in 2014, only 26% of angel investors in the United States were women, and only 8% were minorities. While women own plenty of businesses, the majority of these businesses do not have employees, so the effect is minimal.

According to the United States Census Bureau’s Survey of Business Owners (which is given every five years), women-owned companies comprised only 5% of the sales of American companies in 2012. While that’s the highest this percentage has been in many years, well, 5% is not very high.

Female-owned businesses generated 6.4 percent of overall employment in 2002 and 2007; that number was up to 7.8 percent in 2012. The revenues of female-owned companies follow a similar trajectory—3.7 percent in 2002, 3.5 percent in 2007 and an increase to 4.2 in 2012. Each category of the survey indicates small increases such as these, which of course is good news but also a bit frustrating and disheartening.

Here at Harvard Business Services, Inc., we want to do all we can to encourage women entrepreneurs to start businesses, buy businesses, sell businesses, flip businesses and mentor other women in the business world, so we have created a Business Resources for Women blog series; a few times a year, we will publish as many resources for women in business as we can find. Together, perhaps, we can change this unsatisfactory circumstance.

Pipeline Angels is a group of new and seasoned women investors who create capital for female social entrepreneurs. The organization holds a boot camp for new investors as well as a signature pitch summit for start-ups looking for funding.

Over 180 women entrepreneurs have graduated from the boot camp; over 20 companies have secured funding; and members of Pipeline Angels have invested over 1.7 million dollars in women-led, for-profit social ventures.

The founder & CEO is Natalia Oberti Noguera, and the Board of Directors reads like a Who’s Who of the angel investing and start-up worlds. The list of mentors is pretty impressive, too. This organization seems to embody the notion of women helping women.

The first sentence you see on this website is “Women-owned businesses only receive 4.2% of venture capital,” followed by the challenge “#change the time.” Pretty audacious for a government-funded organization.

The NWBC is a “non-partisan federal advisory council created to serve as an independent source of advice and counsel to the President, Congress and the U.S. Small Business Administration on economic issues of importance to women business owners.”

Its members are prominent female business owners and leaders of women’s business organizations. The Council is comprised of 15 members with three-year terms, and the Chair is appointed by the President of the United States.

Eight members are business owners or CEOs; half of those share the political party of the President and the other half do not. Six members are representatives of national women’s business organizations, such as Astia, National Organization for Women Business Owners and Women’s Business Enterprise National Council.

The mission of the NWBC is to “conduct research on issues important to women business owners and their organizations,” communicate said research; and subsequently supply a platform for the expansion and improvement of opportunities for female business owners. The site offers Research Reports, Annual Reports, Fact Sheets, a blog and an Events list.

Golden Seeds has been promoting female business leaders since 2005. The organization has over 275 members who invest, along with the company’s venture funds, in women-led enterprises. Thus far, Golden Seeds has invested over 70 million dollars in over 65 companies. The types of companies run the gamut: tech, pharma, life sciences, e-commerce and social media.

A three-person Management Committee oversees Golden Seeds, which has a corporate presence in New York City, Boston, Silicon Valley and Texas. The company invests in businesses with women in A-, B- and C-level positions; in fact, a woman must own a large portion of the company’s equity in order to elicit the interest of Golden Seeds, which owns four venture funds that invest in the companies.

Golden Seeds also offers a Knowledge Institute that holds classes, such as “Angel Investing 101: An Introduction to Angel Investing” and “Angel Investing 301: Landing a Deal” for members, as well as prospective members; the classes are meant to “support [their] mission to pursue above market returns through the empowerment of women entrepreneurs and the people who invest in them.”

If you are seeking financial capital for your female-led company, or you are an investor who would like to support women-run companies, Golden Seeds could be the answer you’ve been searching for.

Astia was “founded in Silicon Valley in 1999 as a non-profit dedicated to identifying and promoting best-in-class women and high-growth entrepreneurs.” It is a global company with offices in London, San Francisco and New York. The Astia team includes serial entrepreneurs, angel investors, venture capitalists, corporate leaders, accountants, lawyers and bankers.

This is a multi-stage investment program that picks ventures with strong potential; it finds investment-ready companies with women in leadership positions and gives them access to capital and resources. Astia’s mission is explained in detail in The Astia White Paper.

According to its website, “The Angel Resource Institute (ARI) is a charitable organization devoted to providing education and information on best practices in the field of angel investing. The programs of ARI include educational workshops and seminars, research projects and reports, and information about angel investing for the general public.

Our programs are available to investors, entrepreneurs, policy makers, entrepreneurial support professionals, and many others interested in early-stage capital.” ARI was founded in 2006 as part of the efforts of the distinguished Ewing Marion Kauffman Foundation to support angel investing.

Originally the organization focused on education and training in regard to best practices in angel investing; however, the organization has expanded its efforts to include research, mentoring and leadership initiatives. It partners with Global Entrepreneurship Week and the Ewing Marion Kauffman Foundation.

Women First is an offshoot of the Angel Resource Institute.  It offers “training and educational programs, mentoring, and other activities [in order] to materially increase the number of women and minorities as successful entrepreneurs and investors.” They offer angel investing courses and due diligence courses as well as other investment-related classes.

Chic CEO is an online resource for female entrepreneurs that delivers business information and tools to women building their own companies, as well as a community of like-minded women. Stephanie Burns, the founder and CEO, has put together an impressive Advisory Board and Brain Trust whose goal is to bring together and assist women who don’t know how to implement their business ideas or are scared to do so.

Chic CEO, which caters to 50,000 subscribers, has been named one of the Top 10 Entrepreneurial Websites for Women by FORBES Magazine. There are business plan templates available to download, links to podcasts and a variety of other business-related paperwork you might need when starting your own company.

Watermark is a Bay Area organization, founded in 1993, that aims to increase the representation of women in leadership roles. Watermark hosts over 50 events a year, including the Watermark Conference for Women Silicon Valley (Hillary Rodham Clinton gave the 2015 Keynote Address), the Innovation Conference and the Entrepreneur Conference.

Watermark offers Leadership Development Programs to sponsors; it has recently introduced a Waterman Index to “honor publicly-traded Bay Area-based companies with 30 percent or more of the companies’ governing boards and top-five compensated executive positions held by women.” The purpose of the Index, which pulls its information from the 2015-16 UC Davis Study of California Women Business Leaders, is to highlight gender diversity issues and identify the companies that have helped to close the gap.

There are three different levels of membership in Watermark, but all of them require a certain level of professional success. Watermark also offers a blog, a webinar series and a few different speaking series.

Women@work, a program on Business Radio Powered by the Wharton School, is a weekly talk show that covers topics relating to how women can “join, stay, succeed and lead” in the professional work arena. Hosted by Laura Zarrow, the show features accomplished women from the worlds of business, academia and books, many of them University of Pennsylvania alumna.

Women 2.0, founded in 2006, seeks to “strengthen technology businesses by connecting, inspiring and educating the next generation of technology leaders.” It offers a blog network where female “founders, investors and innovators” can share information, such as their start-up experiences, suggestions and advice.

Women 2.0 also hosts two conferences a year that highlight trends and stories in the world of disruptive innovation. PITCH is a bi-annual competition that offers early-stage female entrepreneurs from all over the world access to funding and accelerators. The website also offers a heap of articles, categorized by Life, Influencer Network, Start-Ups and Technology.

Springboard 2000 Enterprises is a non-profit organization wholly focused on increasing female entrepreneurs’ access to equity markets. “The organization recruits, educates, showcases and supports women-led high-growth businesses as they seek venture capital and grow.” Some of Springboard’s previous collaborators are Harvard, MIT, Columbia University, the Kauffman Foundation, Microsoft and The Paley Center for Media; its list of strategic partners is long and impressive, including Astia, Partnership for New York City, Belle Capital USA, WE Summit and CoFoundersLab.

According to the Springboard Manifesto, the organization stands for Global leadership, economic impact, role models and a better future. Since the year 2000, Springboard has raised over 6.8 billion dollars in equity, grants and strategic investments for 500 companies, 11 of which have filed IPOs and 157 of which have either merged with or been acquired by other companies.

The industries in which Springboards invests vary: Biotech/Healthcare; Software/IT Services; Media/Entertainment; Business Products & Services; Consumer Products & Services; Telecommunications; Financial Services; and Retail. A comprehensive list of companies the organization has invested in can be found on the website.

Programs that introduce women entrepreneurs to alliances and partnerships comprise the core of Springboard’s objective; indeed, the number, variety and geographical locations of the programs border on remarkable.

There are Accelerator Programs, Dolphin Tank Sessions, Caucus Programs, Fashion Tech Lab, Health Innovation Hub, Winners’ Circle Award Dinners, Build It Big and Educational Programs all over the country, not to mention a new SBE Australia chapter. If you own a high growth, woman-led business, Springboard seems to be the perfect source of equity capital for you.

If you just want to borrow money without any mentorship or interference in how you run your business, you might consider the Business Loans Guide on the Consumer Affairs website.