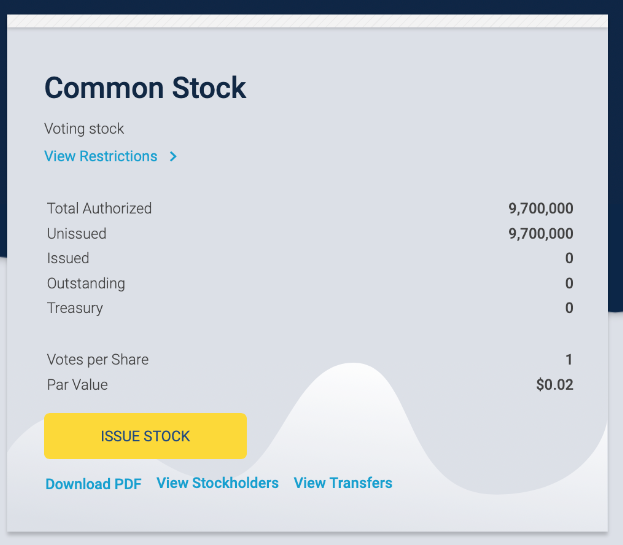 Delaware allows for shares of stock to be evidenced in either of two ways, the traditional paper certificate (Certificated Shares) or the blockchain-friendly data entry in a digital journal (Uncertificated Shares). We asked our General Counsel, Jarrod Melson, to compare the two with regard to what’s really important to entrepreneurs.

Traditionally, ownership of a corporation’s stock has been represented by paper share certificates, referred to as “certificated” shares. These certificates are physically transferred to the recipient by the corporation itself (in the original issuance) or a selling shareholder (in a later purchase or sale by an investor). Certificated shares are inefficient, susceptible to human error in delivery and completion, and prone to loss, damage, and theft, all threatening the accuracy of a corporation’s stockholder list and records.

Below, this article discusses the drawbacks and dangers of using certificated shares and the effect these issues can have on a corporation’s ability to maintain an accurate and up to date stock ledger, as required by the DGCL. Any issues in tracking shares creates a significant issue for a company in keeping its stock ledger accurate, as the Delaware courts consider the presence or absence of person on the stock ledger as creating a legal presumption with respect to their shareholder status.

Delaware has gone a step further in addressing the issues with paper share certificates in permitting a company’s stock ledger to be maintained electronically through a blockchain-enabled distributed ledger (a “Blockchain Ledger”).

The Weaknesses of Certificated Shares

The integration of new technologies and systems is transforming a wide range of established methods in the business, corporate, and finance world. Paper share certificates are now outdated, and the problems they create in tracking share ownership can be addressed through uncertificated shares.

Today, share transactions can be settled and cleared within moments on exchanges. Because of the technicalities of delivering and signing over certificated shares, however, settling trades is delayed two to three days in many cases for those traded publicly. The entire system of clearing and settlement of trades using the Depository Trust Company as a centralized holder of certificates came about to facilitate speed and efficiency in the cumbersome certificate settling process. Even as early as the 1970’s, the process of ridding securities trading of certificates was underway, referred to as “dematerialization.”

Share trades in private companies can be similarly delayed by the delivery of certificates, although there is no set, centralized means of dealing with such inconveniences in the private context. In the case of a company using a Blockchain Ledger, of course, trading is centralized on the Blockchain Ledger system using uncertificated shares, allowing for easy transfer of ownership.

In lieu of holding paper share certificates, many investors use a custodial bank or other institution to keep their certificates safe and to process them in the event of a transfer, surrender, merger, assertion of an appraisal right, or other transaction. Because banks’ back-office policies differ, and the nature of trading in the modern age often results in shares being technically held through nominees or in “street name,” there are times when such intermediaries botch the paperwork involved in signing over a stock certificate, a process that would not occur in uncertificated shares administered through a Blockchain Ledger.

For example, in 2015, five investment funds held their shares in Dell, Inc. through a custodial bank. [1] Dell was engaged in a going-private transaction whereby it would no longer be listed and would have only a handful of large shareholders. Rather than sell its shares to the going-private purchasers, the five funds sought to exercise their right to obtain the appraised value of the shares, rather than the offered purchase price.

In the case of uncertificated shares, there is nothing to physically hold in custody, and no paper certificate to lose or to have mishandled by an intermediary.

This case illustrates that once a person has physical share certificates in hand, it is far easier to lose the certificates or for a third-party to perpetrate a fraud against the owner or the company, and, when the theft of the paper certificates is not noticed for some time, can create significant ambiguity over who is the proper shareholder of record and the appropriate remedy.

On the other hand, uncertificated shares are held in book entry in systems that should bear significant protections against unauthorized intrusion. In a Blockchain Ledger, for instance, access to shares and the ability to dispose of those shares is often protected by multiple layers of security, in some cases including biometric security.

Given modern technology, forgery of a stock certificate, even an elaborate certificate, can be accomplished relatively easily with equipment obtainable from any Staples or Office Depot. A forged certificate can easily be used to defraud not just a private company, but also another shareholder to whom the shares are sold, and which are documented by a forged stock certificate.

In uncertificated shares, particularly those maintained on a Blockchain Ledger, there are no transferred certificates to forge. In fact, hacking and changing record ownership of shares in a Blockchain Ledger is extraordinarily difficult. It takes immense amounts of capital to purchase sufficient computing power to overcome the distributed ledger and self-correction of the record by the blockchain technology.

Certificated stock must include certain legends (statements) stating that the shares cannot be resold under the federal securities laws absent an exemption from registration under the Securities Act of 1933, as amended, and similar state laws. In addition, the certificates must describe any transfer restrictions imposed by the corporation’s governing documents or through agreements to which the company and shareholders are gained.

One of the most common problems with paper certificates is that certain restrictions on the stock are often printed on the back of paper certificates. It is not uncommon in the transfer of shares for these restrictions to be excluded from the new certificates either accidentally or intentionally by a selling shareholder or a transfer agent.  Perhaps more often, the required legends were omitted from the hard-copy certificate in the first place, at their issuance.  If such legends are not included on the certificate, the purchasing shareholder is not bound by the corporation’s own restrictions, although the owner must still abide by the federal and state securities law governing resales of securities.

This was the case in Henry v. Phixios Holdings, Inc.[3]  There, legends on resale restrictions were omitted from the relevant share certificates that evidenced shares sold by a company officer to an employee. The court held that such restrictions were “enforceable against a subsequent purchaser of the security [only if] the restriction is noted conspicuously on the stock certificate, or if the person against whom enforcement is sought had actual knowledge of the restriction at the time of acquiring the security.”

Thus, a corporation’s omission of the legend, or a subsequent shareholder’s removal of the legend, can each have significant repercussions on the company, its governance, and the agreements among its shareholders regarding resales.

Uncertificated shares do not require these legends, although a notice must be provided of the existence of restrictions. Often, particularly in the case of a Blockchain Ledger, this notice is emailed or otherwise sent to the purchasing party upon the automatic documentation of a valid transfer taking place through the Blockchain Ledger.

The DGCL provides that a corporation may generally issue certificated stock, but that the Board of Directors of the corporation, by resolution, may provide that a class or series of a class – or even all classes and series of shares -- shall be uncertificated.[4]

As of this publication (October 2020) there is only ONE blockchain secured digital stock ledger available that we are aware of, the technology is so new. StockTreasury is now available exclusively to Harvard Business Services’ clients, at a special introductory price. Find out more here.

In 2017, the Delaware legislature took a leap forward in accepting electronic records and writings as satisfying written record and delivery requirements, permitting stock ledgers previously maintained in hard copy to be electronic or even blockchain-documented.

Uncertificated Shares and the Ledger Requirement

The Delaware General Corporation Law requires a corporation to create and maintain an accurate and up-to-date stock ledger showing the company’s shareholders and their holdings, among other things. The problems created by certificated shares fundamentally threaten the ability of a growing corporation, which has outgrown a simple spreadsheet for maintaining its stock ledger.

The stock ledger is used, for example, to determine what shareholders are entitled to attend and vote at a regular or special meeting of shareholders, an act referred to as setting the “record date.” It is also used to determine whether a shareholder was, in fact, a shareholder as of a given cut-off date, entitling him, her, or it to a dividend distribution from the corporation.

The stock ledger must also be made available to shareholders requesting it as part of a books and records inspection under the DGCL. An accurate stock ledger in this context is key to permitting shareholders to exercise their voting, consent, association, director due diligence, and advocacy rights and powers.

The failures and issues with certificated shares, and their inability to take advantage of these new technologies, could result in the corporation maintaining an inaccurate share ledger, which violates the DGCL and could be an impediment to taking valid corporate action (such as where an outdated ledger is used to determine shareholders entitled to attend a shareholder meeting and to vote on matters addressed there, potentially invalidating the vote).

Uncertificated shares provide an immense benefit to a company, particularly with:

In order to best serve our clients, Harvard Business Services, Inc. has partnered with StockTreasury to offer its clients a Blockchain Driven Digital Stock Ledger with many of the benefits described herein. As companies continue to choose uncertificated shares and benefit from fintech developments, we (and the market as a whole) will continue to seek the ideal intersection of technology and current practice to streamline corporate practices and administration.