What Is the Foreign Corrupt Practices Act? 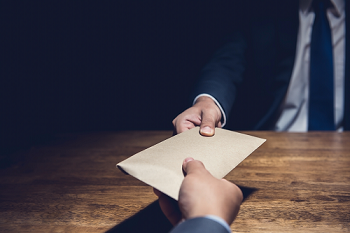 The Foreign Corrupt Practices Act of 1977 (the FCPA or the Act) makes it unlawful for certain U.S. persons, U.S. entities and foreign nationals in the U.S. to pay anything or give anything of value to a foreign government official in order to gain some benefit or otherwise induce the official to use his or her authority to benefit the person or entity. It is most commonly used to punish bribes or favors given to foreign bureaucrats to obtain special licenses, government contracts, rights, privileges, or other benefits.

Many believe that the FCPA applies only to large companies or conglomerates, but its application is far broader; any U.S. business, U.S. person or foreign national in the United States doing business abroad, directly or indirectly through independent contractors or agents, should consider the FCPA’s reach and restrictions.

Enforcement of the FCPA and Penalties

The Department of Justice (DOJ) has the authority to bring criminal actions under the FCPA which can result in substantial fines and, for individuals, fines and a substantial period of imprisonment. The Securities and Exchange Commission has the authority to bring civil and administrative actions against companies and individuals for FCPA violations, resulting in substantial fines and other consequences that can affect a company’s future existence or an individual’s career. Both agencies have consistently-named FCPA investigations and enforcement as a key priority Both have backed up this statement with numerous, aggressive legal actions, and settlements, both criminal and civil.

The FCPA makes it illegal to provide money or anything of value to a foreign official in order to influence that official to misuse his or her position to award the providing company a procurement or services contract, to grant it concessions, tax benefits, or a waiver from any law or regulation to which it would not otherwise be entitled. Any misuse or undue benefit for the company providing the payment (or anything of value) is sufficient.

A company or individual can be liable for the actions of an agent, if that company or individual retains such other person or gives anything of value to that other person while aware or substantially-certain that the other person will go on to give something of value, in violation of FCPA, to a foreign official . The government has proceeded with enforcement actions even where the potential profit from the wrongly- obtained business was very low, as a matter of principle.

The government will proceed if the company or person knew or consciously disregarded that the agent might violate the FCPA on the company or person’s behalf; if the situation is obvious such that a reasonable person would know that an amount would be paid by the agent, knowledge or certainty of the payment can be imputed by a reckless disregard for what might occur. One cannot be willfully or recklessly blind to payments to foreign officials under the FCPA.

Business is increasingly global, and even small businesses may provide goods and services internationally. Companies and individuals that act internationally or pursue business from foreign governments or even entities controlled by or affiliated with foreign governments should consider the FCPA, and should consider adopting policies and procedures to address documenting any gifts or items of value provided to those who might arguably constitute government officials. Employees dealing with international transactions and non-U.S. governments and their agencies and agents should be trained on the FCPA. Contracts with consultants, agents and others should expressly include requirements and representations that they will comply with the FCPA and maintain and provide appropriate records to permit oversight by the retaining company.

Exceptions to the FCPA – Facilitating Payments and Extreme Duress

Facilitating Payments.  A payment made to a foreign official in order to induce that official to do his or her job (i.e., to perform the function he or she regularly performs, such as issuing licenses to do business, allowing lawfully transported materials through customs, or issuing permits to which the applicant is entitled) does not violate the FCPA. The justification is that the company is simply paying for something that is inevitable, while in prohibited cases the paying company is paying to influence the foreign official’s judgment in a corrupt manner and causing the official to act improperly. This exception is controversial, as it encourages the sort of bribery and corruption on the part of foreign officials that the FCPA sought to stamp out in pursuing the “supply side” of the bribery transactions.  In addition, it is difficult to determine in every case whether a payment constitutes a facilitating payment or a bribe subject to the FCPA, so a corporate policy permitting only facilitating payments is so risky as to be untenable in practice.

As mentioned above, the FCPA attacks global corruption by going after the U.S. payors and their agents. Some oppose this one-sided approach, viewing the foreign officials as demanding bribes which creates a business culture of corruption which U.S. companies are only trying to navigate.  Others, however, see the availability of bribes from developed nations as creating corruption and instability in developing nations’ governments and business sectors, rather than vice versa. In any event, the House of Representatives is currently considering the Foreign Extortion Prevention Act (H.R. 4140, introduced on 8/2/2019), a bill that, if passed, would allow U.S. regulators to charge the non-U.S. officials receiving bribes criminally and civilly, although whether such non-U.S. persons will ever face such charges or see extradition to the U.S. is dubious.

The FCPA is subject to two affirmative defenses as well as the exceptions listed above. These are (1) the written local law defense, and (2) the reasonable and bona fide expenditures defense.

The FCPA is aggressively enforced, with new actions or settlements disclosed often. Each of the SEC and DOJ have a separate group tasked solely with enforcement of the FCPA. It is virtually impossible in many places to do business without running into government officials charged with providing or withholding approvals, licenses, regulations, and other forms of bureaucratic largesse, including in contexts such as shipping of goods for import or export and selling to the public, businesses, or the government; seeking or making investments and exploring joint ventures; consulting in various industries, manufacturing and employing persons, or pursuing government contracts. As a result, companies doing business overseas, directly or through agents (who often are only nominally under a company’s direct oversight) must consider the FCPA and plan its operations, relationships, and related compliance programs with the FCPA in mind.