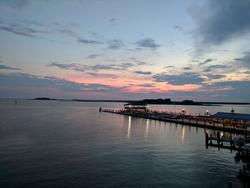 Walk into a job interview and you’re likely to hear about the company’s employee benefits package. Some items are expected, especially for full-time workers: paid time off, health insurance, free or validated parking. Others are common but can’t quite be assumed: a 401(k) or other retirement account, dental insurance, flexible schedules, a year-end bonus.

Absent among these common benefits is an annual waterfront weekend getaway for employees. The team here at Harvard Business Services, though, enjoys just that. With a company-owned condo overlooking the Chesapeake Bay in Crisfield, Maryland, the company is able to offer this unique perk to any of its employees looking for a peaceful, inexpensive (just a $45 cleaning fee) weekend retreat.

Company Founder and Chairman, Rick Bell, recently spoke with radio station WDEL, based in Wilmington, Delaware, about the condo.

This is not the first time Harvard’s employee perks have been documented in the media. The Washington Post Magazine recently published a piece about a surprise tax break bonus employees were awarded in 2018 after Congress passed the U.S. Tax Cuts and Jobs Act.

Getting back to that waterfront condo…

Weekend guests find themselves with a number of amenities--a full kitchen, three bedrooms, private parking and a wraparound 2nd floor balcony provide more than one might expect from a local hotel. Without cable and internet service, the idea is that the condo can serve as a respite from everyday life.

Harvard, through Rick’s implementation, also offers a number of other employee benefits. These include some of the more common ones as well as certain “extras” and profit sharing opportunities. Even the company’s health insurance benefits include free dental and vision coverage.

Tuition reimbursement was introduced as a benefit in 2014 not only to encourage employees to advance their education, but as an investment to the company’s non-citizen employees. When one employee, living and working in the area with a student visa, realized that graduating from an undergraduate program meant having to return to his home country. Instead, he was able to extend his visa by enrolling in a Master’s degree program.

Rick, seeing the value this employee brought to the company, decided it was in his best interest to contribute to the tuition costs to make the mental and financial burden of maintaining both obligations a little easier. Subsequently, the benefit was extended to all Harvard employees.

To better understand the value of Harvard’s employee benefits, you don’t have to look any further than the company’s employee retention rate. Since 1981, the company has grown from a two-person operation of just Rick and his wife Paulise, working out of their basement to a strong corporate and community partner of Lewes, Delaware, employing roughly 40 local residents. In that group, 13 have been with the company more than 10 years, which entitles them to a $10,000 (post-tax) bonus and a banquet.

Despite being an immensely popular destination for summer travelers, the beaches region of southern Delaware (including Lewes, Rehoboth, Dewey, and Bethany Beach, along with neighboring towns) does not house a large number of sizeable, year-round employers. The largest in the area is Beebe Healthcare, which owns and operates a hospital in Lewes and a number of smaller satellite offices and medical practices in the region.

Career opportunities grow in number as you travel north to Dover, Wilmington and onto Philadelphia and Baltimore, or west toward Annapolis and Washington, D.C. However, those areas are typically not ideal commuting distance for a resident of this area. Thus, many young professionals head toward the nearby cities (or further ones) to launch their careers, leaving the coastal region open to a large number of retirement homes, communities, and related services. Finding great employees can be a challenge.

Harvard represents one of few non-seasonal, actively growing businesses with well-entrenched roots in the area. Its main industry competition is located in Wilmington, in the northern end of the state. As the third-largest incorporator in the state, Harvard understands that keeping a strong team together, in spite of a smaller pool of candidates, is key to its continued success.